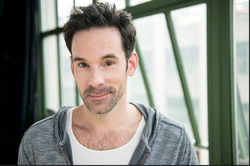 Matthew Hardy was born in the deep South. When Matthew first learned to crawl he immediately set North for New York, but due to a defective sense of direction, which he inherited from his Mother, Matthew ended up in Texas. Fortunately Matthew’s parents caught up with him before he crawled into the Gulf of Mexico and tied him to a post in Houston to keep him from wandering off. Matthew stayed tied to that post for most of his formative years before heading off to attend college in Utah. It was during his stay in Utah that Matthew recalled his primal urge to crawl to New York City. Matthew set off immediately for New York, but once again his defective sense of direction led him to the West coast where he boarded a cruise ship and sailed around the world for a year and a half before arriving in New York in February of 2002.
​
Matthew is a Bookwriter, Lyricist and Composer whose musicals include Virtuoso (2020 Premiere),The C Word (2017 Premiere), Twinkle Tames a Dragon (Off Broadway 2016, National Tour 2017), Fancy Nancy Splendiferous Christmas (Off Broadway 2014-16, National Tour 2015-16), Flambe Dreams (NYMF 2012 Excellence in Lyric Writing), Ever Happily After (NYMF 2013, Center Stage Theatre, Maltz Jupiter Theatre), Bonnets & Bling (West Chester University 2016), and The Rubberers (Delaware New Works Festival 2008, West Chester University 2014).

As an actor Matthew has toured nationally with the Broadway production of Fosse and Jane Comfort’s Faith Healing. Regional credits include Barnum (Barnum), Swing (Everett), A Few Good Men (Dawson), Cats (Skimbleshanks), Annie Get Your Gun (Tommy), Gutenberg! The Musical! (Bud) and a lead vocalist in the world premiere of Disney's When You Wish at TUTS. Matthew was honored to be included among twenty other New York actors in Backstage East's "2007 Performances to Remember" for his performance as Froyim in Fritz & Froyim at the Times Square Arts Center.

Originally from Houston, Texas, Matthew is a graduate of Brigham Young University (BFA), University of Utah (MA) and the William Esper Studio. Matthew is an Anna Sosenko Trust Recipient (2012), and a Jerry Boch Award Finalist (2011). He is a member of Actor's Equity, The Dramatist Guild and The BMI Lehman Engel Musical Theater Workshop.